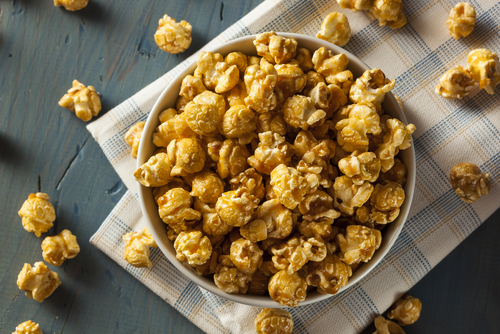 America eats approximately seventeen billion quarts of popcorn a year, which is enough to fill the Empire State Building eighteen times. That’s a lot of popcorn! Typically, popcorn consumption in America picks up in late summer, rises through the fall and winter and begins waning in the late spring and summer months. October is National Popping Popcorn Month, and we thought it would be fun in today’s blog to bring our readers at Liv Northgate some fun facts about and recipes for popcorn.

Popcorn kernels can pop up to 3 feet in the air.

Contrary to popular belief, popcorn is not the only corn able to pop. Many flint and dent corns also pop, but their flakes are smaller. Additionally, some varieties of rice, milo, millet, and sorghum also pop. Some varieties of quinoa, a sacred Incan food, also pops like popcorn, as does amaranth.

A 1,700-year-old funeral urn was discovered in Mexico that shows a corn god wearing a popcorn headdress.

When television became popular in the early 1950s, popcorn sales decreased because people stayed home to watch movies rather than go to a theater. However, when popcorn was more readily available at home, popcorn again became popular.

What is your favorite way to eat popcorn? Share in the comments so we can all try it out! Thanks for reading today’s blog post and for being a part of our Gilbert, AZ apartment community.